Saw the new kitty hanging around right outside the door, hungry. Great time to set the trap. I use a Havahart Live Trap, set with canned, stinky food. These traps have a trigger pressure plate so when the kitty (or raccoon or fox or skunk) go inside, they get all the way in before stepping on the trigger plate, and the door behind them snaps shut but is far enough away to (hopefully) not catch any tail or fur in the closure. The trap has a spring loaded lock so it stays shut once the critter is inside.

I barely walked away and she was already climbing in. After a few ins and outs, she finally set it off and proceeded to turn into the Tasmanian Devil. After a bit, I brought the whole cage in, locked the bathroom from everyone else and let her loose in there. She proceeded to Tasmanian Devil the entire bathroom. I stood in the center of the room and quaked in fear as she blasted past and all around me, flying through the air, bashing into the windows, bashing her face into the mirror, climbing the walls... But never once touching me! Somehow I got out safe, but I still hear the pummeling the bathroom is taking. Sigh..... need to slip in some kitty downers under the door.

A couple of hours pass...

Just slipped in some stinky food and spritzed around the door with Feliway. I didn't see her, but heard her shuffling on the counter. I'm still unscathed.... however she keeps banging into the windows and mirrors (it seems that she really doesn't understand glass), poor girl. Well... still not sure she's a girl, and I sure as heckfire am NOT goin' in there to see!!!

I locked her into the bathroom that is off of the second bedroom (my studio). Still have the main bathroom off the bedroom to use. I sure am glad I shut the lid on the potty before I let her loose. Usually I leave that one open, as our kitty, Dobby, uses it sometimes, but I'm sure she would have gone in - she was leaping up the door a good 6-7 feet. I was cowering by the shelves until I could make my way out. BJ was outside the door just listening to the pounding and stuff falling. Everything that was on the counter is now in the sink. Everything along the edge of my tub is now down in the tub. I'm hoping my shower curtains haven't been ripped up.....

She's calmed down now, is knocked out (she was hitting the windows really hard) or has passed out from sheer exhaustion... I looked in through the window, but didn't see her. I saw the various things that are now tipped, dumped, destroyed.... nothing major though, so far. There is a little blood in the tub, but I think it was from her clawing at the trap when she was first caught. She can rip the toilet paper to shreds if she wants to. I'm OK with that.

There are several spots I can't see from the window - the toilet area, the kitty box - she might have climbed in there to hide, it's a cave, or around by the closet door, also a nice cave. The stinky food looks untouched, but perhaps the smell of it will get her interested once she rests for a bit. I won't go in there for a while, although I WANT TO!!!! I want to go in, hold her, snuggle her, show her how much she's loved..... However, I think I saw some nuts as he was flying around the room. In the shot below, he'd leapt up to the curtain rod above the window in the shower and jammed himself as far into the corner as he could get. 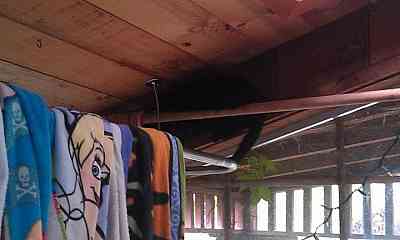 The crashing and banging has stopped for quite a while now, so I'm going to sneak into the Tasmanian Devil's room and sit for a bit. Wish me luck. I will be talking, softly, so he gets used to seeing me and hearing me, but mostly, I'll just be reading for a bit, not interacting, just so he sees there is no death involved. More than anything, I need to check to see if he's OK.

I'll be careful, as I had my hand mauled a couple years back. One of the bites went through the back of my hand and I got a staph infection in the tendon sheath of my middle finger. My hand swelled up like a boxing glove, and unfortunately, I was working with gloves on the whole day, so didn't see it, just knew it hurt, but of course it hurt, I got bit, right? When I got done working, I went in and took a bath, soaking my hand (big mistake, it turns out!). When I got out, my hand had swelled up and there was white goo seeping out, with red lines going up my arm. BJ took one look, said: "In the truck, now!" and rushed me to the hospital, almost an hour away. No time to lose. Arrived at the ER, checked in and the chick asked what was wrong. I said: "I have a big hand." and showed her this huge boxing glove. Gahhh!!! They rushed me right in. They thought at first that I would have to have my hand amputated but decided to go ahead with treatment, as it may not be too late. If the lines had reached my armpit, they said I would have died. We spent the next three days around the clock driving nearly an hour each way, visiting the ER every six hours for a big tank of super antibiotics through an IV drip. Better than being admitted & it took a lot of persuasion to get then to let us do that. I had to keep my hand raised, so our jokes were "Who's the happiest?" and "Let's give her a big hand!!" The bite was from a neighbors cat, so the police showed up at their door to quarantine the cat. That freaked them out. So yeah... I'm kinda jerky about new cats, but I still take them in.... What choice do I have? 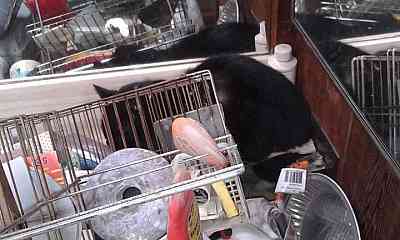 That wire shelving thing used to be full and standing where he is now ensconced. He sure seemed relatively calm outside so, hopefully, it won't be too long 'til I can at least check him over and gain his friendship.

He's so afraid. I gave him some raw chicken and some more stinky food and quietly left. COMING SOON - Meet The Tasmanian Devil Thanks for following! Peace, Joy